The Dubuque Community School District has again been honored with the Best Communities for Music Education designation from The NAMM Foundation for its outstanding commitment to music education.

This is the fourth consecutive year the district has received the honor.

Now in its 22nd year, the Best Communities for Music Education designation is awarded to districts that demonstrate outstanding achievement in efforts to provide music access and education to all students.

To qualify for the Best Communities designation, the district answered detailed questions about funding, graduation requirements, music class participation, instruction time, facilities, support for the music program and community music-making programs. Responses were verified with school officials and reviewed by The Music Research Institute at the University of Kansas.

“The district has long recognized the value of music education in our schools, and music remains an integral part of our curricular and extracurricular offerings,” said Stan Rheingans, superintendent of schools. “Our district commitment is underscored by tremendous partnerships throughout our community that support our work to expose students to music education. This honor is truly a community honor.”

About The NAMM Foundation
The NAMM Foundation is a nonprofit supported in part by the National Association of Music Merchants and its approximately 10,400 members around the world. The foundation advances active participation in music making across the lifespan by supporting scientific research, philanthropic giving and public service programs.

The Dubuque Senior High School Color Guard competed in the Marching Auxiliaries Classic Regional Competition in Sioux City, Iowa, on February 6, and returned with a host of awards and accolades.

The online feedback form for these draft calendars is now closed.

The district Board of Education will host a public hearing about the calendar on Monday, December 14, at 5:30 p.m. at the Forum, 2300 Chaney Road.

The Parking Lottery names have been drawn for 2019-20 school year. Below are the lists of those selected:

For students selected, please print and complete the appropriate form below and bring it to school during registration with the required accompanying documentation.

NOTE: If you have problems accessing the Parking Permit Forms above, please contact the Main Office at 563/552-5500 for assistance obtaining a copy.

Now is the time for students in the Class of 2020 to start thinking about your senior yearbook photo.

To submit your photo:

We love watching a new group of Dubuque Community School District graduates walk across the stage at commencement – and we wish them much success in the future.

Below are the 2019 Dubuque Senior High School and Hempstead High School graduation videos so you can relive the excitement!

Dubuque Senior High School will present the musical adaptation of the smash-hit movie, Footloose. Performances will be Friday, November 2 and Saturday, November 3 at 7:00pm, and Sunday, November 4 at 2:00pm. Dubuque Senior’s production will be performed in the Lamb-Hedeman Auditorium with a cast, crew and orchestra of more than 100 students.

DESCRIPTION: Based on the hit 1980s musical, and featuring top songs from the era, Footloose is the story of a group of students triumphing over tragedy. Life in small-town Bomont is peaceful until Ren arrives from Chicago. Breaking every taboo, Ren and his fellow students bring dance back to the heart of a town struggling with the loss of one of their own. Footloose is a celebration of the power of young people – and the young at heart. Music is by Tom Snow, lyrics by Dean Pitchford and additional music by Eric Carmen, Sammy Hagar, Kenny Loggins and Jim Steinman.

We love watching a new group of Dubuque Community School District graduates walk across the stage at commencement – and we wish them much success in the future.

Below are the 2018 Dubuque Senior High School and Hempstead High School graduation videos so you can relive the excitement! 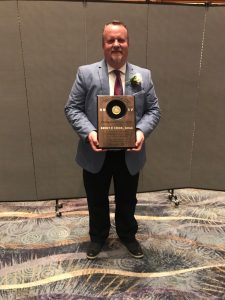 Brent Cook, assistant principal for activities/athletics at Dubuque Senior High School, was named one of 11 national recipients of the 2017 Distinguished Service Awards given by the National Interscholastic Athletic Administrators Association (NIAAA).

The award was presented on December 12 in Phoenix, Arizona, during the banquet at the 48th annual National Athletic Directors Conference conducted jointly by the National Federation of State High School Associations (NFHS) and the NIAAA.
END_OF_DOCUMENT_TOKEN_TO_BE_REPLACED